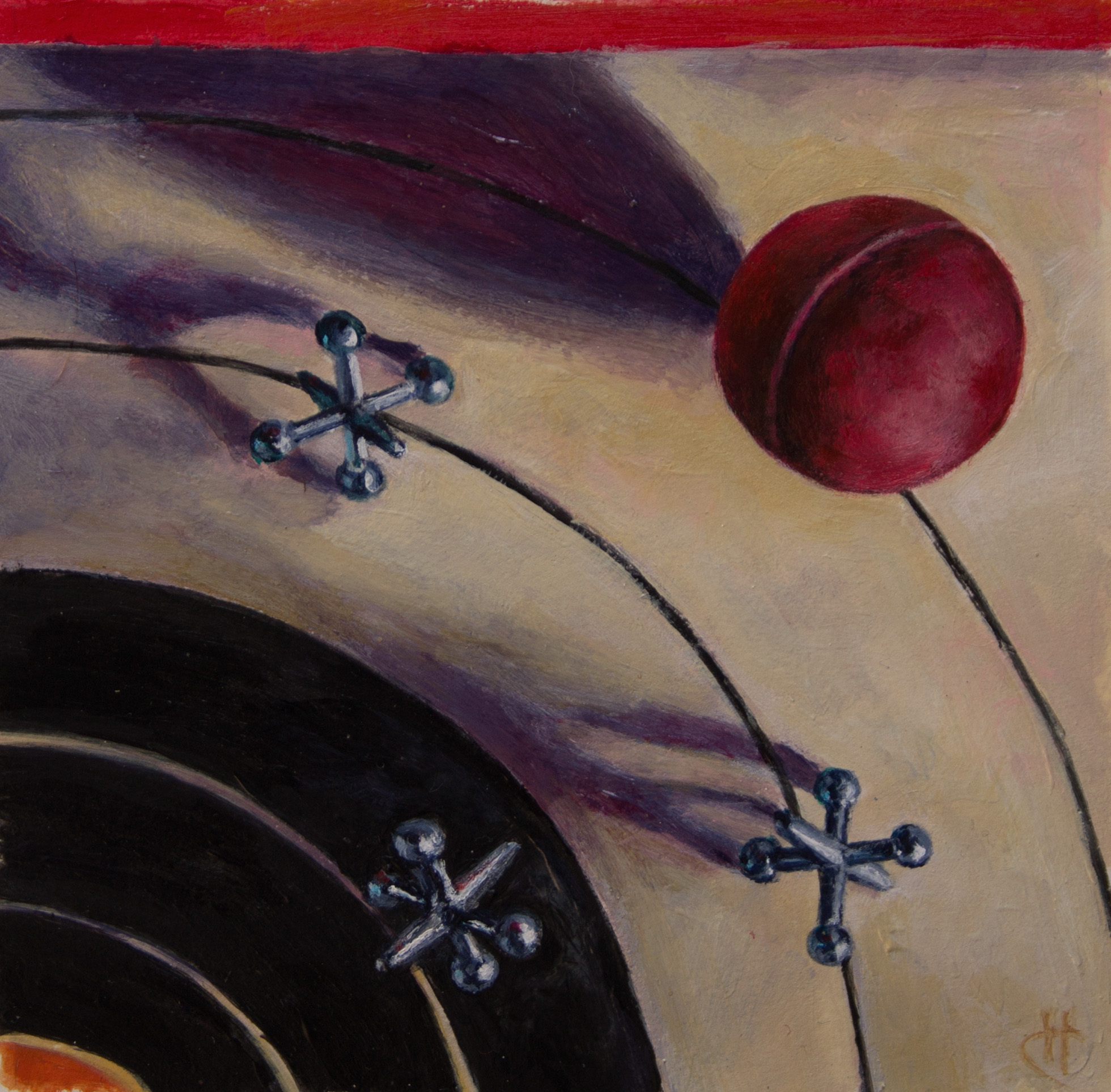 The shadow series does not waver from my general still life interests and intentions. As shadows increasingly have greater import in my compositions, I became interested in portraying their duplicitous nature. Shadows can simultaneously reveal, mimic, shelter, loom, or deceive expanding the opportunity for metaphor.

My interest in still life comes from my curiosity of the significant objects
we choose to surround ourselves.
The domestic landscapes we inhabit are filled with trinkets that range from mundane to meaningful.
They imprint our psyche more than we are aware.
A unique iconography continues to evolve from the commonplace subjects I paint.
Though symbolic narrative is present, I primarily hope my imagery evokes curiosity or triggers a personal response to time, place, or experience. 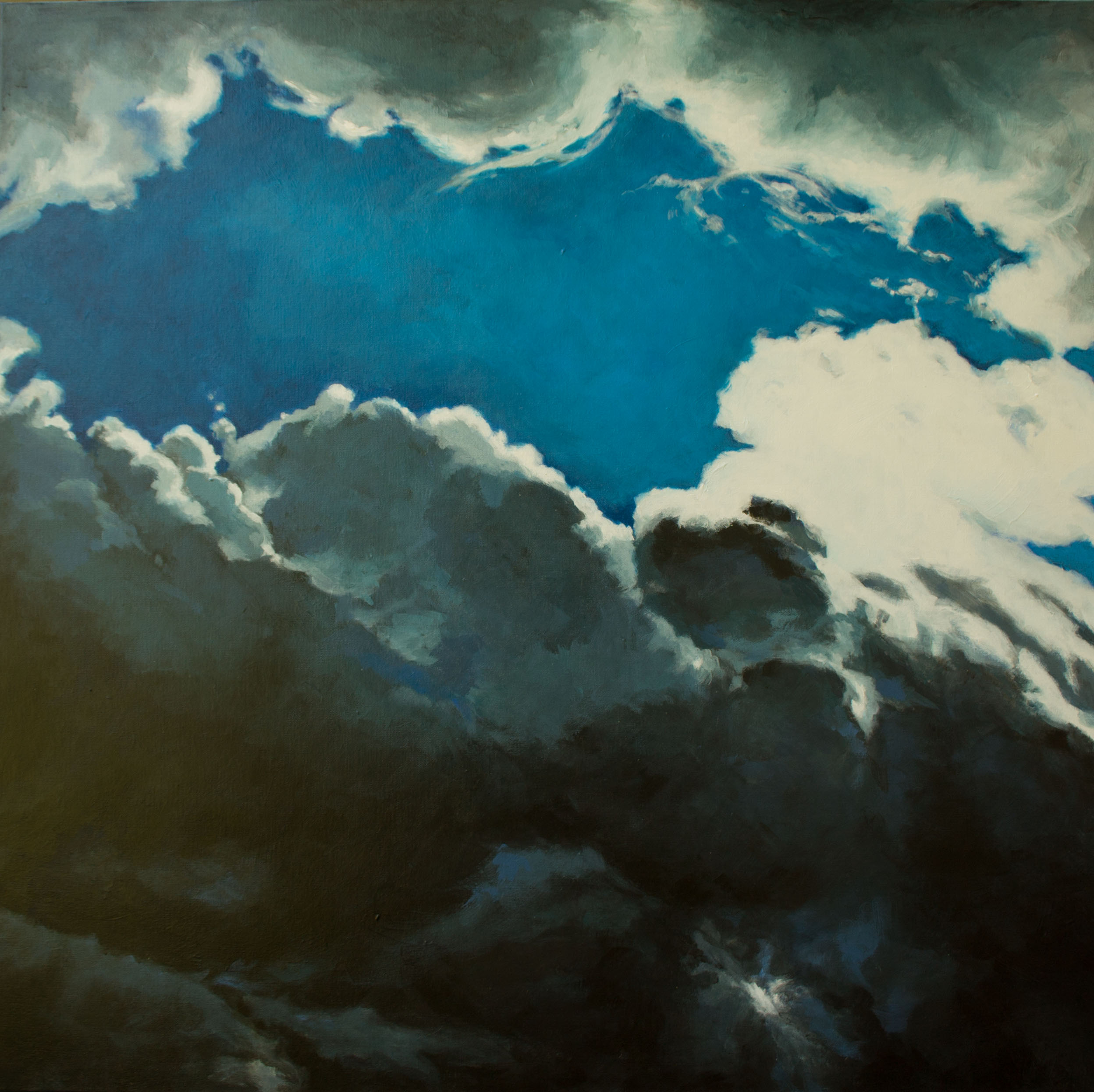 childhood I have been an avid observer of the dramatic and everchanging Texas skies. They reflect the moody nature of Texas weather which can quickly transform from the ‘buttermilk clouds’ of summer to foreboding storms in minutes and then ultimately present brilliant palettes at days end. Watching the beauty & drama unfold never fails to induce awe and closeness to my creator.
Clouds afford me a degree of abstraction and essential focus on color, form, and movement.

Occasionally I include water towers starkly contrasted against a field of blue. Their presence on the horizon is an image of identity, an essential icon of the small Texas town. I am drawn to their significance in these rural communities as well as the play of light on the industrial forms. 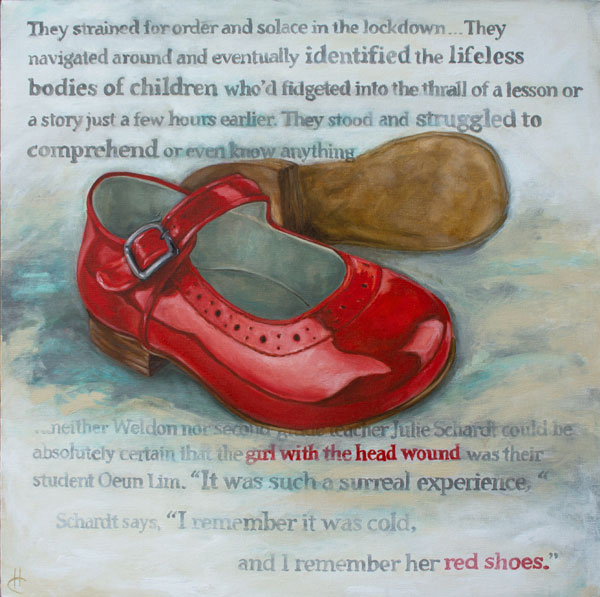 The Target series is a definite departure from my usual work. These paintings address the personal and public impact of gun violence that has become an undesirable societal constant for our nation. Our collective conscience is numbed to the impact of each personal loss as this epidemic continues, with paralyzing effects on reform. The random violent acts aimed at our schools, theaters, nightclubs, concerts, churches, and countless individuals wears on our corporate psyche.

I use symbols to surreptitiously confront the viewer with their sober message. Desiring they ignite empathy for the families and honor the victims beyond the ’24-hour news cycle’. My greatest hope is these paintings stir emotions, spur dialogue, and provoke impactful change regarding this complicated dilemma.
I believe if this issue is ignored, we are all possible ‘Targets.’

Personal Postscript
When researching the personal stories from each event, I experience overwhelming emotions which precipitate the images or symbols which become prominent in each composition. The Targets works are raw and responsive – reflecting a wide range of personal emotions: anger, empathy, mourning and frustration. Each shooting evokes a unique response, resulting in the most stylistically disjunctive work I have ever created.
I began ‘Small Targets’ shortly after Sandy Hook focusing on school shootings alone. As time went on, I could not ignore public attacks, re-visioning the scope to all ‘Targets’. I never dreamed years later I would still be adding memorials to this series. 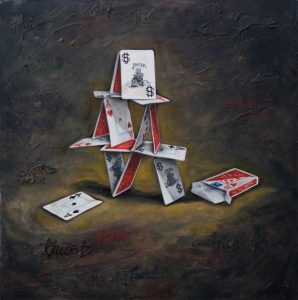 I have always echoed the Dutch ‘vanitas’ with their rich tradition of symbolism via ordinary objects. Universal struggles of hope, vanity, faith, loss, & memory are implied through my own personal iconography. At this time I wanted to mimic the illusion and mood of the Dutch masters in my still lifes and portraits. 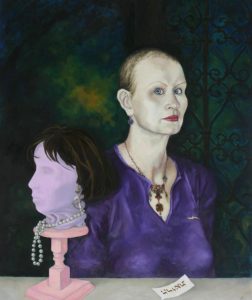 Survivors was a response to our cultural obsession with ‘reality TV’ portraying human existence in fabricated situations. The ‘Survivor’ portraits address the true reality of life experience.
These portraits are singular ‘snapshots,’ reflecting a season of struggle. These paintings are not meant to define the subject or judge their situation, rather to record a ‘defining moment’ of human struggle. A true survivor bends with trials; gaining strength & wisdom. 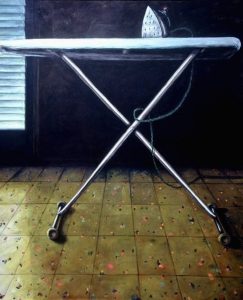 These works were generated from personal experience and observation. Since I was a child I have had a certain affinity for interior spaces. I was fascinated by the paths of hot Texas sunlight that bleached the rooms in our house. The ominous dark corners and hallways of evening intrigued me. I found my own private worlds at play in the closet, under tents made from dining room chairs and old sheets, or laying beneath the kitchen table during long, adult conversations.

I observed a great many contradictions about the role of women in these domestic spaces. Messages were conflicting. The matriarchs of my family were strong minded and accomplished (often in areas which were not considered to be women’s territory at the time), yet their days were filled with “woman’s work.” Their strengths were well concealed within the outward trappings of a “good” wife and mother.

Growing older I gained an interest in the complexities of human relationships. As I studied them and looked inward, I became intrigued by the patterns of communication we develop from our subconscious observations as children. I recall that while playing under the table as a child, I had an awareness of covert expressions of anger, double entendres and innuendoes that were communicated in the space between steaming cups of coffee above me. I may not have listened to or comprehended a word, but my unconscious senses were awakened to the emotions that spilled over the edges of the table to my world.

Feelings of fear, love, mistrust and guilt as well as role expectations can be communicated and received quite subtly. I attempt to express in my work these subtleties of communication within the context of my past interiors. My “domestic landscapes” are autobiographical narratives which depict aspects of memory, psychologically charged interiors and the portraiture of specific objects from these memories and places. I call on the askew realism of dreams and the imaginative realm of the child’s mind to manipulate the representation of specific images from my memory. I produce unfamiliar environments from the familiar with dramatic “film noir” lighting, odd color usage and the baroque distortion of western perspective. Most of the situations are drawn from a low vantage point – a “child’s eye view.”
Pulling images from memory has  interesting and unexpected effects on the directions these works. In attempting to depict aspects of memory, I create elements of distortion, simultaneous viewpoints and symbolic imagery of my childhood; tricycles, coffee cups, paper airplanes, lit and unlit candles, dominoes and other adult game pieces. These symbols in my paintings are usually the most specific visual queues that trigger memories, whereas the interiors are composites of individual details of various spaces; lighting effects, wall papers, door knobs, shag carpet,  tile, etc 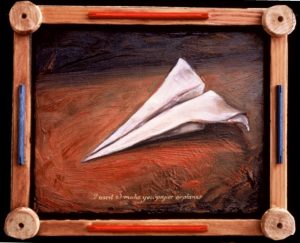 I refer to the still lifes from this series as ‘Domestic Effects’. The personal ‘effects’ of those we love and interact with have significance for me. These objects can trigger memories charged with a vast array of emotions. In some instances even stand as a metaphor for a specific relationship. 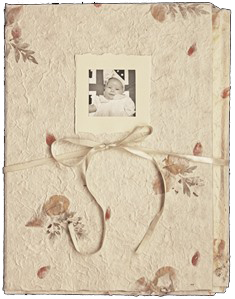 “It is easier for me to paint than to write about it.
And I would so much rather people would look at them than read about it.”
-Georgia O’Keefe

I felt I could best express my heart and experiences of motherhood through art. These journals display what I observed of these new beings . Studying their image, every curve of their faces or ‘perfectly- imperfect’ wrinkle of an ear. The toys and activities they loved gave me insight into who they were becoming. Some entries speak of hardship, which we all grew through: illness, grief and the expressions of child-like faith these brought to us all.

As with any mothers journal these reflections were purposefully created so my children would know they are my treasure.